Links Archive: In the Arts

For each subcategory on the Want More? page, only one to two links will be on the active page. All others will take up residence here in their respective categories as they drop. Links are in reverse chronological order, with the newer links at the top of the category.

In addition to the HBO documentary (at right), 20 September will also see the release of the film "Don't Ask, Don't Tell" by Michael Eisner's Vuguru. According to the Reuters article, it tells the story of 18 people affected by the policy and is based on his Obie-winning Off Broadway play, "Another American: Asking and Telling."

Among the film’s cast of characters are: U.S. Army Staff Sgt. Miriam Ben Shalom, who was dishonorably discharged after the Army learned she is gay; Navy officer Al Portes, who testified before a Congressional committee that he "will refuse to serve with gays in the military;" and a mother whose son was killed by his squad because he was gay. 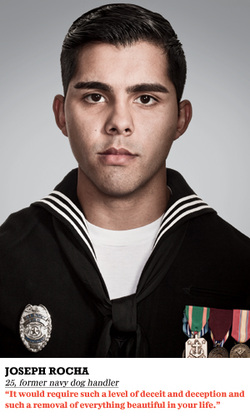 Chris Heath of GQ Magazine interviewed a dozen gay servicemembers, both active duty and veterans, for their September issue.
An excerpt from Rocha's (pictured at left) interview:

Silence can protect, but it can also provide a potent and despicable weapon. In the shadow of "Don't Ask, Don't Tell," whenever gay servicemen did face any kind of homophobic harassment, they were powerless to draw attention to it without potentially triggering the end of their military career. The rule itself became the very tool of their oppression: "The 'Don't Ask, Don't Tell' policy," says Joseph Rocha (navy, 2004–7), "punishes homosexuals who comply, and it protects bigots."

Before his own experience turned ugly, Rocha was exactly the kind of idealistic, motivated recruit the military must wish for. He signed the paperwork on his eighteenth birthday, and eventually applied to join a K-9 unit in Bahrain, training to be a dog handler. "I just got caught up in this little unit with no oversight, with a history of corruption and a history of abuse and harassment and hazing, and I didn't survive it."

Click here to read the rest of Rocha's story. 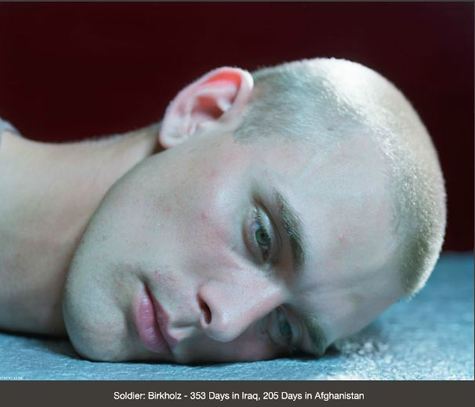 Though not specifically focused on the homosexual aspect of the soldier, I would challenge anyone to distinguish the sexual orientation of the soldiers in this collection, and itemize an argument as to what difference it would make. Suzanne Opton's art was used in the Billboard Project, here. Opton offers explanation of the project and the location of each in 2006 here on her website as well.

The beer commercial that the Budweiser company is staying “mum” on, as to whether or not it's supposed to depict a gay soldier and his boyfriend. Here's hoping he'd give his hero better than Bud, but… wooo, the puns.

Our Marine officer, "AreYouSurprised," is back on YouTube with a video update. He wants some feedback on a coworker's bias. And his little "coming out" video has almost 10k views, which I think is absolutely awesome. 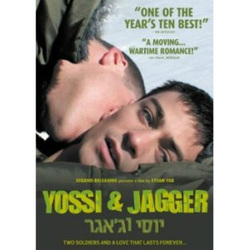 Tom Keogh's editorial review of Yossi & Jagger from the Amazon product page:
The moving Yossi & Jagger, at 65 minutes in length, has the focused impact and emotional clarity of a fine short story. This unusual love tale, set on a snowy Israeli-Lebanese border facing possible Hezbollah incursions, has an unexpected sweetness and buoyancy. Knoller plays square-jawed, no-nonsense Yossi, company commander of an Israeli Defense Forces unit exhausted from sleepless nights anticipating an ambush. The handsome, fun-loving Jagger (Yehuda Levi), nicknamed for his rock-star appeal, is platoon leader and, unknown to all, Yossi's secret lover. The two arrange trysts by going off together on missions, and while Jagger begs Yossi to leave the army when the former's service is up, Yossi reminds him that real life is not a romantic movie. Meanwhile, the platoon's other characters and a trio of visitors--a colonel (Sharon Reginiano) and his two female soldier-companions (Hani Furstenberg, Aya Koren)--prove to be a lot of fun sorting out everything from menus to love lives before their next, possibly lethal mission. Director Eytan Fox's naturalistic touch, and ability to highlight the expansiveness of mature love even in the most tragic and ironic of circumstances, is something to marvel at.

Injecting a bit of humor into the subject matter... Okay, remember he’s stereotyping West Hollywood here as you watch this one. In the very least, the pink head-bucket is good for a laugh. And this was a couple years back… “Gay Marines” by Denny Johnston.

Former Marine Jeff Key reflects upon his time in the military, on stage in the Big Apple. ”The Eyes of Babylon” is largely taken from journal entries he wrote while serving in Iraq—before being discharged when he came out. The above linked article includes an interview with Keys, whose work was previously thwarted from release in NYC because producers didn’t see a pro-gay, anti-war monologue as a moneymaker. It appears the tide of public opinion has certainly changed. In New York, at least.

John Fisher's play Fighting Mac! is at Theater Rhino through June 19th. This is the latest in a series of Fisher's plays that explores gays in the military. His previous efforts included Combat!, Amnesia, and Special Forces. ...Can I get these on DVD somewhere? Check out the Bay Area Reporter's write-up on Fighting Mac!, there's a very cute photo of West Point cadets grappling with each other. Yeah, they're just the actors, but so what!